One year ago today we adopted Mr. Fox!!  I took him home on a Friday after getting him from Nanci and her niece, who was his foster mom for a few weeks.  That's when they told me he was NOT a lap dog. 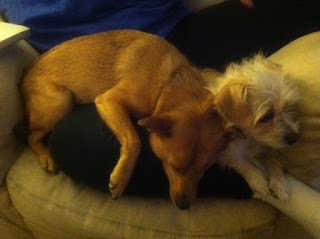 Spending the night in my lap - Ms. Scruffy has worked her way in there too!

My sweet Foxy Boy.....  In the time we've had him, he's:
Mr. Fox is definitely a different dog than he was when we brought him home a year ago.  He was unpettable - not that, that's a word - but seriously, you couldn't pet him without his mouthing you constantly and he was unwalkable as well - there's another non-word for you from the 4th grade teacher!  He sure is a lot better and just a love.  Maybe us humans will have some cake to celebrate and perhaps there will be some special treats for the pups.
Posted by allyk at 10:14 AM 2 comments:

By now, many of you know of the latest ordeal we have been through with Mr. Fox and our rescue Ginger Pie.  However I'm going to write about it, for those who don't and to help deal with what happened.

Since August, Mr. Fox has been the same ol' funny dog he was - extremely hyper and extremely loving, wanting as much affection as he could get.  I still hear the words of Mr. Fox's foster dad saying, "This is definitely NOT a lap dog."  I was a bit saddened when I heard that but thought, "Oh well, he's cute anyway."  Mr. Fox became the ultimate lap dog, ironically.  He is always in my lap.  If I am sitting, he's on my lap-no question-he is there. 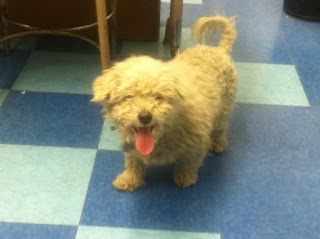 This is the poodle who led me to the shelter where I found Ginger.

The first week of December brought a very dirty, moppy haired poodle onto our school campus.  It was the week of parent conferences and I had heard a dog was found.  I was secretly thinking Foxy might like a friend when I went to a neighboring classroom and saw him.  My teacher friend couldn't keep him in her room because she had parents coming, so I took him to my room using a jump rope as a leash.  He was a sweet heart of a dog.  He had a collar, an LA county dog license and a tag with his name and phone number that were barely readable.  The school office had called animal control because he had a license and when the officer came to pick him up I told the guy I wasn't willing to turn him over if they were going to kill him at the shelter.  He said no, they would call the owner.  The next day, a Thursday, I called the shelter to find out what happened to the poodle.  They told me that his owner was contacted and said, they would maybe come and get him.  MAYBE? Really?  I thought, if that were my dog, I'd be running there waving my credit card or check book willing to pay anything to get him back.  Ugh.  On Friday, I went to the shelter to see what happened and tell them I would take the poodle if nobody came for him.  Well, he was picked up by his people and I went and walked around the shelter looking at all the little doggies.

I walked the aisles a few times and on one of my passes I saw a little scruffy dog and on her paper on the cage it said, "My name is Ginger"  The name Ginger was written by someone in pen.  I knew then I had to take her as Ginger was the name of our family's beloved Brittany Spaniel my parents found when I was in third grade.  It felt meant to be.  I called my sister who said the same and then I called Husband who said OK, but made me ask the shelter worker if the dog barked in English and/or Spanish!  OMG!  I thought I was going to die of embarrassment but I wanted that dog so I did it.  The woman laughed - thankfully.  So....  I took home Ms. Ginger Pie on December 9th.  She was sooooo scared, she wouldn't even walk on the leash.  Poor baby.  She spent the next few days hiding either under the bed or in her crate and when she came out Mr. Fox was relentless about playing with her.  I don't know that I'd ever seen something so sweet as his persistence in getting her to play.  He poked her over and over and over and over again until she finally started to swat him with her paw and over time that turned into the two of them playing. 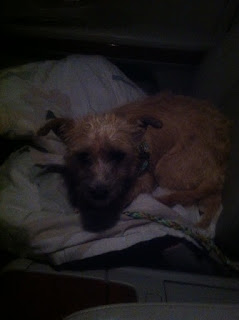 Ginger's ride home in the car.  She was very scared.

My two pups would play like you would expect two young dogs to play.  There was a lot of noise on Foxy's part - he makes a lot of dog noise that is intended to make you think he is very ferocious - HA! If he only knew, that we humans know better.  Fox and Ginger would roll around, nip each other, play tug of war with a toy and then sleep together.  Somehow, Ginger always won the toy!  Girl Power!!  Then I would have guilt - poor Fox didn't have the bone .....  I quickly realized there was a drawer full of rawhide bones he could have had, he just wanted what ever Ginger had and she wanted what he had.  It was just a pack thing I guess.

Speaking of things Ginger wanted... she wanted to be in my lap, in Mr. Fox's usual spot but I didn't give it to her.  Mr. Fox would jump up into my lap as soon he saw her heading that way and Ginger Pie would make her self comfortable lying next to me or on the back of the couch and on my shoulders at the same time.  These two pups became fast friends. 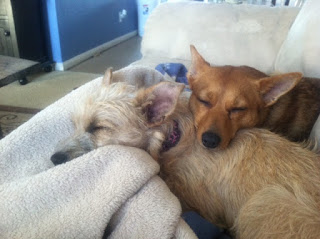 This was a regular sight.  Sweet doggies in love.

On New Year's Eve Husband noticed the dogs were getting out of the front yard and then he saw that Ginger, a good terrier, was digging a big hole under the wall.  He plugged it up with bricks and went around the yard the next day plugging up any questionable areas.  Somehow on January 4, 2012, not even a month after we got Ginger, the dogs escaped the yard.  I believe it was on the side where we have a gate that had a space between it and the wall.  Anyway.... I went out for just an hour and came home to an empty house and empty yard.  Trying not to panic, I called husband who said he didn't come home and take them anywhere so, knowing my nosy neighbors I went right to the animal control department.  I figured one of them would have called and reported me.  There was no one there so I drove to the shelter where I saw a woman holding Mr. Fox on a puppy leash.  He was in shock and his poor eye was mangled and hanging out.  As I cried, the nice lady that brought him there told me he was hit and she picked up just wandering around.  Apparently it was a hit and run.  I asked where my other dog (Ginger) was but she didn't say anything.  I scooped up Foxy and drove to the vet.  While I drove, animal control called me and told me that they had found Ginger, deceased, in the same spot Mr. Fox was hit.  It is all just too sad.

I ran into the vet's office and they were wonderful.  Expensive but wonderful.  They took Foxy and gave him pain medicine and an antibiotic and determined his eye would have to come out the next day.  And so it was....  We went home that night to a dogless house and spent the next day in the dogless house and quite frankly I was very worried about Husband.  He was not taking this well and was catatonic, sleeping on an off and staring into space.  We got to bring Fox home that night and the poor guy was just as crazy on the leash - did he not know his eye was just removed??  But once in the house he slept on me constantly and trembled on an off for the rest of the week.  Thankfully I had that week off and T was in school so I could help my poor doggy. 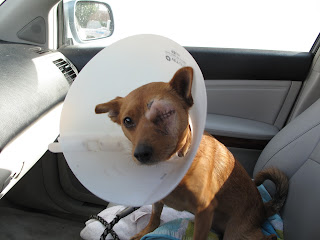 Foxy when I brought him home for the hospital after eye surgery.
When we got home Foxy ran from room to room looking for Ginger and then looked at us.  Damn that was sad.  However, over the next two weeks Mr. Fox got better and better and acted like his crazy old self.  He would look up at us at night while we sat on the couch watching tv and he'd bark crazily at us.  This was the time he Ginger would have their most fun playtime.  We played with him but it wasn't the same for him so we got him another scruffy dog two weeks later.  And this time we gave her the name Husband wanted, Scruffy, because I got the $2500 dog.  Now we have Scruffy and she is beyond cute and they are good friends and Foxy still loses the bone or toy every time but I've seen him just let go and give it to Scruffy.  My sweet boy. 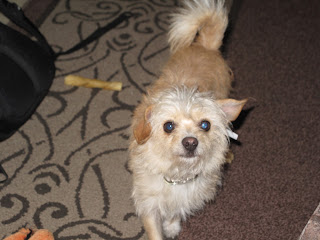 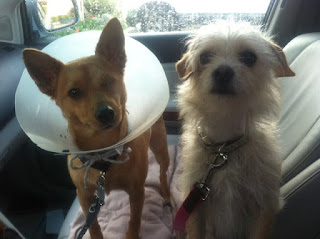 Mr. Fox and Scruffy have a day out.

Thanks to everyone who sent their love and support either verbally, written or even silently.  It was felt and appreciated.