Of friends could even begin to tolerate Mr. Fox peeing in her house!!!

You read that right folks.  I took Mr. Fox over to see my friend and his friend Sylvia.  Well, Sylvie once again, put Mr. Fox in his place, forcefully and repeatedly!!  It really is something to see a little toy poodle tell off Foxy!  I guess he'd had it and decided to pee on the coffee table.  OMG!!!  Are you kidding me?  He did it right in front of us, as we sat on the sofa talking!!  How freakin' embarrassing!!  Then there was cleaning.... 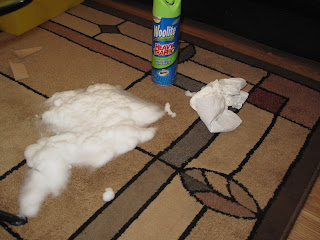 About an hour later all of us made our way to another room where the dog antics continued and then I heard this from one of my friend's kids, "Mom, I see water on the floor by the chair and it looks yellow, I think it's pee."  WHAT!!??  You rotten dog!  You peed on my friend's chair!!!  I put his nose in it and there was more cleaning.  So embarrassing.... 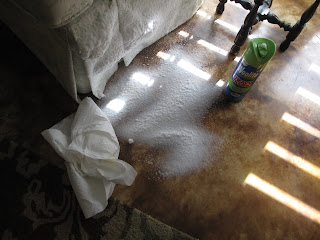 But.. Look at the fun the dogs had chasing each other.  Notice at about 7 seconds, Fox looks at the camera like, 'Oooo, an audience.'


He is so bad, yet I love him so.
Oh Mr. Fox, we laughed so hard at you and you didn't even realize it you crazy pup.

Mr. Fox has been with us four whole months!!  He certainly has come a long way.

Then:  He ran back and forth from the front door to the back door over and over and over for about 3 weeks.
Now:  He lays happily, in my lap mostly, or on the sofa or on any soft pillow he finds. 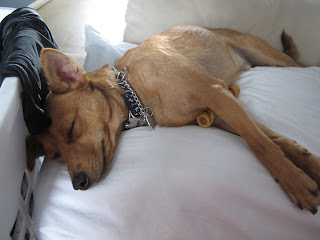 Notice the bone he's holding in his paws.
Then:  He would try to run out the door to escape as soon as it was opened.
Now:  He sits and sadly watches the door close or he will run out the gate and right into the car if we are going for a ride.

Then:  He was impossible on the leash.  I could hardly walk him without him trying to attack everything, and I mean everything, including the wind, as we walked.
Now:  He is a nutjob as we walk out the door and to the corner - he has to make it past the dogs next door that bark and the dogs at the house on the corner that bark.  I'm giving him treats for good behavior and it's helped.  By the end of the walk he's a more normal dog.

Then:  He didn't know about belly or ear rubs.
Now:  He happily flops on his back for a good belly rub - he seems to like those better than the ear rubs. 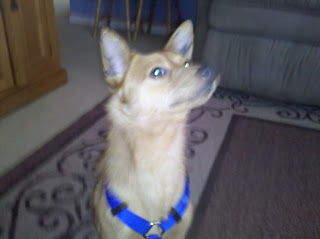 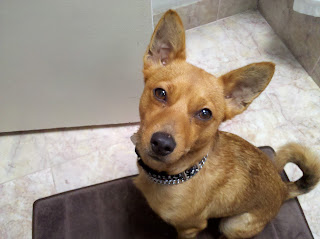 Now - in the bathroom with me!
Then:  He would just wander aimlessly around the house.
Now:  He follows me everywhere, even the bathroom!

It's the second week of July currently but before school was out Mr. Fox took it upon himself to fix up the living room as only he could.

One late afternoon I was driving home at about 4:30 pm, which is the time I normally come home to Foxy, I was talking to Husband on the phone about our dinner plans for that night.  He suggested that we meet at Denny's for dinner.  Great idea!  I didn't have to cook - woo hoo!!  I got Little T and we all had a nice dinner.  Of course this would mean getting home to Mr. Fox about an hour later than normal.  Hmmmm......

As we finished our meal, Husband said to me, "I have a surprise for you when you get home."  "Oooo, what?"  I replied.  "Cleanliness!" he said.  Apparently Husband had one of his guys vacuum and pick up the clutter in the living room.  I was so happy my guy did this for me.  Imagine my surprise when I opened the door and saw this: 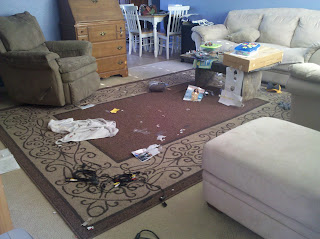 Apparently Mr. Asshole, uh Mr. Fox, decided to redecorate and/or mess up the place that Husband so proudly had cleaned.  I let out a very loud audible gasp when I saw this.  Husband was right behind me in his truck so I waited and opened the door for him so he could have the same effect.  Husband was not happy and we found both of ourselves saying 'Baaaaadd Dooooggg!'
Posted by allyk at 12:00 AM No comments: