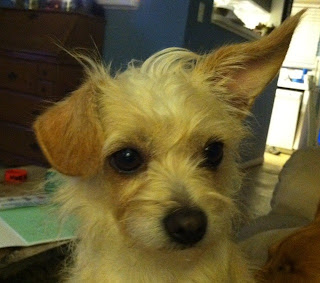 This is Scruffy's collar.... 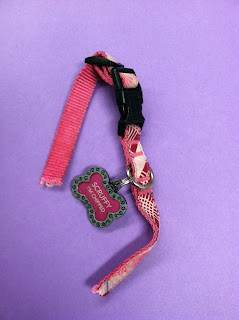 Yes, it is ripped apart.  Do you want to know it got that way?

MR. FOX CHEWED IT OFF OF HER NECK!!!
This is not the first time the One-Eyed Wonder (as his fairy godmother, Nanci calls him) has done this.  This is the SECOND collar he has chewed off her neck.  I mean, does she just lay there during the day when we are at work and allow Fox to gnaw at her neck???  I mean really...  At night, the Mr. Fox will play with her or lick her face but she's a pretty tough cookie and she growls and doesn't let him get away with very much.  Ugh.

Now I want to find her a new, more durable collar.  I already got another Target cheapy because I must have a tag on her.  I'm paranoid since the previous escaping incident.  I have a metal choke collar for her, but I hate that thing.  My childhood dogs all grew up with choke collars but you know, she is a girl.  A real girlie girl at that.  I mean she should really be named Cupcake or Princess (no, not that, I have a girl in my class with that name) or Tiffany or Tiara or something feminine.  I thought I was going to get my pink buying jollies with this dog.  You know, pink collar, pink leash, pink sweater and maybe even a pink bow in that Scruffy hair BUT NOOOOO....  I have to have some durable collar because of my one-eyed beast!  Man I love that Foxy Dog!!  He is so bad sometimes but I love him to bits!

I think the funniest thing was when I saw the collar this morning and I said, "Baaad Dog!" and Husband told me not to scold the dog because he doesn't know what he did wrong and we don't want him to get a complex.  Yes, he was serious.  Really, he was.  He is a hopeless animal lover.  One day I will tell you about the raccoons.
Posted by allyk at 8:16 PM 6 comments:

I almost killed the dog.

I am an idiot.  Sometimes I think the animals are smarter than us humans, but then again the idiot animal ate the macadamias I gave him.  Shouldn't at least HE know they are toxic to his kind!

My little thief - Foxy Boy - was cutely leaning his snout on to the coffee table and grabbing a macadamia nut here and there off a paper plate we had them in.  Husband, T and I had been munching on them earlier.  There were about 15 nuts left on the plate and I said, "Oh Foxy, you can have them." And then I put the plate on the floor for him so he wouldn't have to crane his neck to eat the nuts.  Little did I know.

Husband got up in the morning and said that Foxy had puked up something disgusting.  I queried...  "What did it look like?"  "White squares."  Husband said, in a sleepy voice, this being at 7 am.  I found Mr. Fox laying on the couch unable to walk.  He was lethargic and hot.  My poor baby.  I thought about running to the vet and taking the day off.  However, two things went through my mind.  First, I can not get a sub this close to the school day starting and second, I don't have another $2500 to fix this but... I have a credit card with a big limit.  Husband said he would keep Fox with him all day in his truck as drove from job site to errand to job site, etc.  I felt better but would've liked to hear, "Oh honey, I will take the dog to the vet the minute it opens and pay any amount of money."  I will take what I can get however.

Off to school I go.  Teach the children...  Worry about dog...  Teach... Text Husband...  Husband called. (Normally I don't answer the phone while teaching but this time I did.) He told me Mr. Fox was walking around and even at some cat crunchies.  I know that's not good but we are rule breakers around here.  Plus Foxy was excited to go on his daily ride in Husband's truck to take T to school.  Phew.

It wasn't until later that day that it hit me - the white square things were the macadamia nuts from the night before.  I came home from work and checked the internet where I found out that macadamias, onions, grapes and chocolate, among other things are toxic to our furry friends.  I knew about the chocolate but not the others.  Yikes. 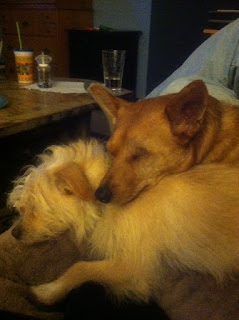 Mr. Fox & Scruffy having a snuggle.

I will be much more careful in feeding my babies from now on!
Posted by allyk at 7:34 PM 4 comments:

Symbiosis - as defined by Wikipedia: is close and often long-term interaction between different biological species.

Yes folks, I know this is a blog about the dog but we have two cats also and they've been with us for ten years now.  Our cats are Scooby and Shaggy.  I thought it would be cute to give the cats dog names and theirs come from the cartoon, for anyone not familiar.  Scooby is Husband's cat and Shaggy is my cat.  They are identical twins in looks but have very different catitudes.  Scooby is afraid of his own shadow and Shaggy, well, not so much.  Scooby's fur is so silky and clean and Shaggy, well, not so much!  Let's just say your hand feels a little film of dirt on his fur when petting him.  Needless to say, he lives up to his name.

We've always had a cat door, which is now also a dog door, and Shaggy makes good use of it by going out hunting every night.  Ewww, you are thinking... dead critters.  Not quite.  Shaggy is a special kind of hunter.  He only hunts trash.  Yes, trash.  His favorite items to bring us are empty Marlboro cigarette packs.  He's brought us other brands but that one comes in most often.  Over the years he's brought us dirty napkins, old lottery tickets, socks, a bag of used hair ties, restaurant menus, empty chip bags and the list goes on and on.  I just love my Shaggy.


Actually, when the dogs arrived I noticed we received fewer trash gifts from Shaggy but he is back to his normal delivery rate and it seems Mr. Fox and Scruffy are happy about this.  You know Mr. Fox just loves a balled up napkin or paper towel and Shaggy loves bringing them home.  Hence, the perfect symbiotic relationship has been born.  Shaggy brings the trash and Fox & Scruffy tear it up.  I ask you, does it get any better than that?  Well, ok, maybe! 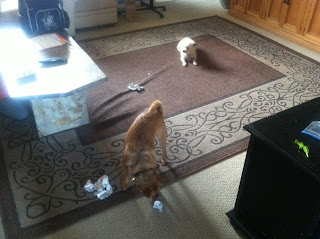 My Shaggy is the most special cat.  I know you may think that about your cat but really, this boy is something else.  I was never a big cat person having grown up with dogs but being a renter for a long time, I became one.  Shaggy is outgoing and loving and I believe he and Scooby are Maine Coons which is the kind of cat you see on most greeting cards, etc.  Before the dogs came along Shaggy would lay on me every night and I don't just mean in my lap, I mean on my chest, purring the night away.  Then it would be off to bed where he would sleep right next to me.  Poor guy has been displaced a bit by the dogs.  He has been a very good sport about it and not peed on anything as a punishment to us.  Cats do that you know, get you back for living in THEIR house.  They merely put up with us.  Shaggy, you are the best cat!
Posted by allyk at 2:50 PM 2 comments:

We have been experiencing some very unpleasant side effects of Easter over here in Mr. Foxville.  We had a lovely chicken dinner as one guest doesn't eat ham and it was very easy to stick a chicken in the crock pot all day.  I also made some lovely roasted potatoes and steamed broccoli, aka the remnants.

Mr. Fox is happy to inhale anything that hits the floor accidentally, on purpose.  Scruffy will sniff if and make a decision if she will eat it.  Both were happy with a few pieces of chicken.  Since Little T didn't eat all his broccoli, like most 7 1/2 year olds, I decided to see what would happen if it landed on the floor.  Dumb, dumb human I am....  You know who loooooved that broccoli???  Of course, Mr. Fox.  Sucked down ever floret that he could.  Guess who smelled it and wasn't interested?  Yep, the girl - my little Scruffster. 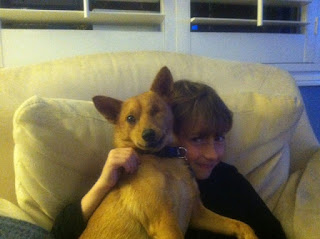 Gasser #1 and My Boy

This broccoli has been making its way out of Mr. Fox for the past two days and has nearly killed us.  Sometimes he lets out some, uh... broccoli, and then walks away leaving us in the wake of that stink!  Ironically, it is usually Scuffy who gasses us! 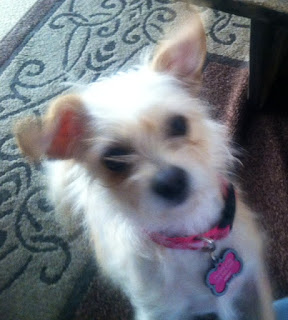 Gasser #2 and Perhaps the Smarter of the Two?
Posted by allyk at 10:27 PM No comments:

Always the scavenger... such is the plight of the former street dog.  Mr. Fox has no problem getting up on his hind legs for something he wants and he does it every night when he steals used napkins and paper towels from the trash can.  He loves to take them into husband's office.  I find them all torn up in there.  He has learned to 'drop it' on demand, which is soooo incredibly huge for his little doggy soul.

When my mother was in town, we had to have dessert every night.  A real hardship, I tell you.  So, while we humans were enjoying our strawberries and cool whip Fox took to his usual begging, complete with all of his weird noises.  Could grandma resist???  The biggest sucker for a sad dog face and in this case only one eye, making her feel extra guilty???  NO WAY!  He licked that cool whip right off the spoon.

I think this silly dog would have eaten the whole tub of cool whip and you know Grandma would have enjoyed feeding it to him.  I took a cute video but I can't get it to upload.  Oh well.  So, is Mr. Fox the only doggy who who eats off of a spoon?