A Run at the Playground


My poor babies hadn't been for a walkie in a whole week so I took them to the school playground for a nice running around.  Well my sweet Scruffster got a hold of Mr. Fox's leash and ran behind him trying to pull him and shaking the leash in her mouth like she was killing a mouse.  It was cute.  The pics are blurry but you get the idea. 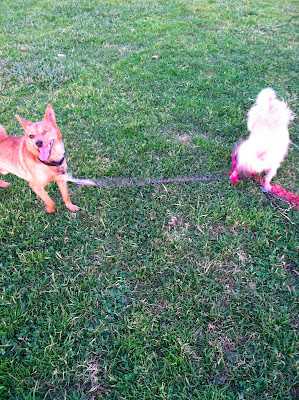 Scuffy looks like a little white blur in the picture - she was having such fun - at Mr. Fox's expense!
I think all that farting at the dogter's was a sign Mr. Fox had a belly ache because he was chowing down on the grass.

I sure do love my furiends.  I don't have hundreds of them or loads of comments but I tell you, I love my furiends who come and visit and leave me comments.  It brings me smiles everyday to visit blogville and see what you all are up to.  I mean life is stressful, you know.  Work all day with noisy kids who need 'consequences' to be quiet and listen, come home and tell Tyger to eat, do homework, clean up, get ready for bed, etc... or there will be 'consequences' and then cook dinner and do laundry, blah, blah, blah.  I mean there hasn't even been enough time for walkies around here.

What a respite to travel around the country and world and see my buddies and hear from them too!  As Sweet William says, 'Thank you for being a friend.' 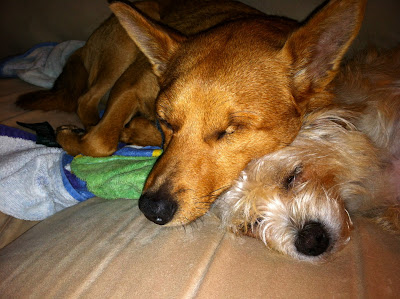 This time I took both dogs.


Once we got the vet dogter, Scruffy immediately began to tremble.  Poor baby.  I held her but she still wasn't happy.

Mr. Fox decided to gas everyone out of the waiting room.  One poor lady with her guinea pig began to sniff its butt thinking her little guinea pig was the offender.  I had to tell everyone it was Fox and apologize.  So embarrassing.


We waited in the exam room and Mr. Fox proceeded to fart about 5 more times.  Nice.  Tyger and I nearly died in there.  I think I saw a plant die.  When the dogter came in she said Mr. Fox knew how to clear a room.  Ain't that the truth!  He wasn't too thrilled to be up on the exam table so even though I was loosely holding him and had his leash, he decided to just leap off and onto the floor while the dogter was trying to listen to his heart.  Cute dope that he is!  Then he hid in the corner but I didn't get a picture.  When it came time for them both to go in the back and get their shots and Mr. Fox to get his nails trimmed,  he went happily but Scruffy, smart terrier that she is, refused to walk that way unless I went that way.  Poor girl, I had to pick her up and hand her to the nurse.

One thing that made me happy was the dogter said that Mr. Fox's eye - the missing one - looked great.  I always worry it's going to open or something.  She said she left a little extra skin so he wouldn't have too much nerve damage and could still make cute expressions.

Tyger and I waited in the freshly sprayed with air freshener waiting room.  When the dogs came back we paid the excessive bill for three shots for Fox, one booster for Scruffy, two heartworm tests, one box of Trifexis, one nail trimming and various 'we looked at your dog' fees.  I will have to remind Tyger of this when he's 18 and we have no money for college!  I kid...
Posted by allyk at 5:00 AM 8 comments:

Kyla must be right - Shaggy is a spy kitty.  Look what he brought us.

He must think we smoke or is trying to tell us something about my neighbor who smokes.  Either way, he has favored Marlboro's for years!!

I went to work the other day and saw this trash in the street.  I couldn't help but wonder if it was my Shaggy, the best cat.  You know he loves to bring us trash every night as a way showing his love and gratitude for being wonderful peeps.  This post describes my Shaggy and his trash. 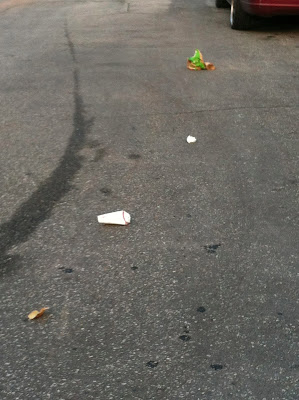 I thought, 'those look like the kind of things Shaggy likes but perhaps a little too big' and he had brought us an empty pack of cigarettes that night so I figured these were a little too big and he gave up on them.  Who knows?  I want to put a camera on that boy and see where he goes.

We went for a walkie the other day and it always strikes me how much poop these dogs make.  I mean seriously, in a thirty minute walk I walk away with this: 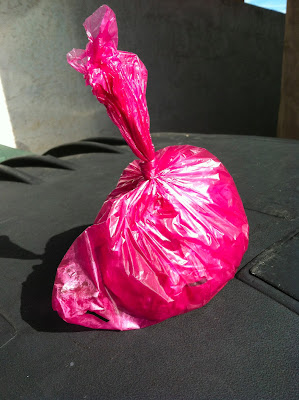 There are 6 poops in that bag.  SIX!  Four of those poops were made by Scruffy, the small one.  Four poops!  One or two of them were like Hershey Kisses but still.  Mr. Fox had a biggie and a Hershey Kiss which seems more normal.  By the way, for each new poop I use a new bag (obviously) and then stuff it into the first poop bag, making one big poop bag.  So there are five bags in that one.

How much poop do you guys make on a walkie?

PS.
This is how I typed this post, with my lovies. 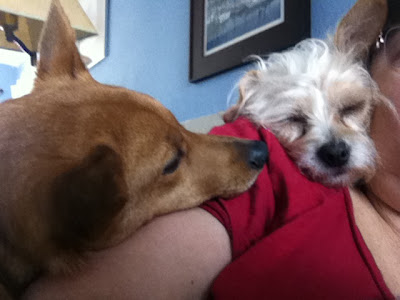 Last week I had the Non Flu.  That's right.  I was sick and home from work for a whole week but it wasn't the flu.  I never stay home from work that long so it was baaad.  I got the cold and worked for a week with that.  Then came the body aches but the urgent care swabbed my nose with a giant q-tip and it said I didn't have the flu.  Just a virus.  I spent my week on the couch like this... 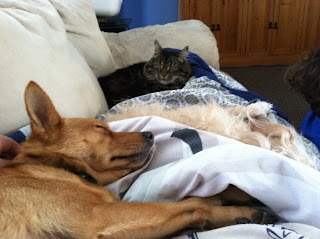 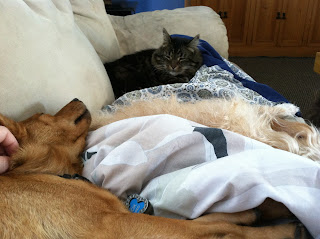 I love being loved unconditionally.
Posted by allyk at 6:00 AM 12 comments:

A couple weeks ago I took Ms. Scruffy to the dogter.  Time for a check up...  I was very happy because the last time I took her she began trembling the minute we walked in the door.  She didn't tremble this time at all even though she was not thrilled to be there.

She didn't like getting her temp taken and hugged me the whole time.  Scruffy weighs 12.5 pounds!  I feel like such a proud Italian mama, I fattened her up from a measly 8.8 lbs. Then we waited for the dogter.
When the dogter came, Scruffy was not going for the teeth exam so I pulled up her lips and then it was time for more examining and Scruffy jumped into my arms.  Poor little girl.  She did ok though and then it was time for the shots and nail clipping in the back.  She didn't want to go but came back with nice trimmed nails and her shots.

We are going again this week with Mr. Fox and Scruffy's getting a booster for Lepto.  Oh boy, me and two dogs at the vet!