I love my fur babies but damn they don't help me have a good night's sleep.  Last night was typical.

At 3:30am Mr. Fox bolted off the bed and out the dog door barking his head off.  I laid there thinking he'll be done in a minute.  Nope.  Got up to get him in at which time Scruffy ran out the dog door and began barking.  As I am standing at the door with the cold air whisper yelling, "MR. FOX!  BAD DOG!" Husband, from the bed, says, "Bad Dog" and in they both trot.  &^%&$ dogs!

Now, that wouldn't be too bad if I could fall back to sleep right away like Husband does.  But no, no I can''t and part of the reason is because Scruffy, in her new relaxed state, decided to lay next to me expecting copious amounts of petting and rubbing and any time I slowed down or stopped she gave me the nose under my hand.  I get it dog.  I'll keep going since I'm not sleeping anyway.  After a good half hour of this she seemed content enough to have me stop.  I'm in the clear I thought, and can try to fall asleep again.

Not so fast.  Along came Shaggy, the best cat.  He now expected his fair share of rubbing.  He decided to put himself on my chest.  He's 20lbs.  At least he purred.  I do love the purring.  It really is calming.  After another 20 minutes, I decided to try and roll ever so slightly so he'd sort of fall off to the side and I could just keep my arm on him.  He got up and left.  Finally, I rolled over AND COULDN'T SLEEP!!!  It must've been close to 5am when I finally fell asleep again.

This morning I am wondering why I care weather the cat and dog or comfortable?  OMG!  Something is wrong with me!

Apparently something isn't wrong with me.  We didn't open Saturday's mail until Sunday after I typed the above and received this:
I looked at Husband and said that's it, we have to get the bark collar.  I've thought of this for a while and am not surprised we got this in mail  we have apartments that border our yard and who wants to be woken up at 3 am every night.  I know you're thinking 'why not just close the dog door?'  I wish I could but I have Shaggy, the best cat, who will go insane if he can't go out at night and hunt trash.

Husband, the real softie in the house, tried this out on himself first and said it just feels like a pinch.  Mr. Fox got pinched twice and that was the end of that.  No more barking.  Now I have to work on Scruffy.  She's smaller and as my mother has said, trainable.  My mother, ace dog trainer, has said that Mr. Fox is untrainable :(  I know, he's bad, very impulsive but leaps and bounds better than when we rescued him from his life on the street.  I took him on a walk with the collar and it worked quite well in his two usual spots where he goes insane (after walking the same way for a year and a half).  He got excited but not psycho.  This thing doesn't just pinch him willy nilly, so that makes my guilt feel better.  Please don't yell at me - we've been at a loss with this boy and doing the best we can.
Posted by allyk at 6:24 PM 19 comments:

Today is Scruffy's Gotcha Day!  It may not seem like a big deal to some people but to the dogs it sure is a great day.  One year ago today we sprung Scruffy from dog jail aka, the shelter.  It was ok as far as dog pounds go but who wants to live in a noisy concrete pen?

Last year at this time Mr. Fox was getting antsy in his cone of shame with his missing eye and wanted a furiend to play with him.  Someone who's face he could bite or whose collar he could rip off.  I began scouring the shelter websites for a dog that looked like Ginger Pie so Fox would be happy.  I didn't know if it was the right thing really, especially for us humans.  We were traumatized still from the bad thing that had happened only a few weeks prior.  Sooo... I found this little Scruffy on the shelter website.

I called the shelter and asked if she was available and the lady on the phone promptly told me that this dog had been labeled 'aggressive' and I had better not make up my mind until I met her.  Off I went after work and on the freeway to the shelter.  I talked to the guy on duty and he said she had just been returned the day before by some jackasses people who took her home for one day and during that one day she growled at their toddler and their cat.  Poor thing.  That damn baby and cat probably scared her.  She's a little dog so she has to protect herself with her growl.  When the guy took her out of the cage she was friendly and we even went over to the window where all the cats were and she didn't growl at them.  She was comin' home with me!

When we got her home she was a little growly but not so bad and now, a year later, she doesn't growl a lot anymore.  She was scared when she first came home and didn't know what to do.  She got the dreaded bath and trembled terribly.  Now she still trembles but not that much after her baths and only if something really scares her like a screaming, playing 8 year old boy who needs yelling at.  She has just, within the past month, begun to relax.  By that I mean, she lays in my lap longer and her little ten pound body has lost so much tension.  I can feel it.  She even sighs...
She has her name because Ginger was a scruffy dog and husband wanted to call her Scruffy but I said no because one my favorite dogs we had as a kid was named Ginger (pre-scottie days).  When I walked in the house, one of the first things Husband said to me was, "This dog's name is Scruffy because you got that $2500 dog."  He was talking about Mr. Fox, whose eye cost that much.  So my little cupcake is named Scruffy.  Tyger at some point came up with the nickname Scruffy Doodles and that has morphed into Scruffy Doodolls and Doodle Dog.  We just love her little Scruffiness!!

I'm Not Buying It

I went into the pet store today to get some of this stuff... 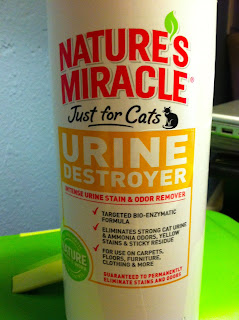 because one of my damn cats peed on the couch again!  This is the only thing to get the smell out.  Yuk.  Husband and I have ongoing arguments over which cat is the offender.  I say it's Scooby, his cat.  He says Scooby is too busy hiding under the bed and sneaking out the cat door to do it.  He swears, it's Shaggy, my cat, who brings us wonderful trash each day.  Either way, the couch stinks and I think the reason for this is because Husband put out a cat box.  We had taken them all away and made them do all their business outside.  Now, we have a box just outside the cat door.  I think this pissed someone off, literally.  Ah, but I digress.... 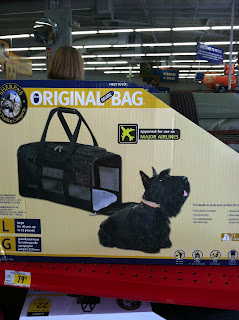 That a Scottie is going to voluntarily get into that bag carrier.  Are you kidding me?  A Scottie is far to smart to just waltz on into that thing and be carried like a purse pooch.  I mean maybe for some green beans or some dog cookies, neither pictured on the box, would the Scottie go into that thing.  I think they should show the dog's peep tossing goodies into the back of that thing and trying to get the dog in, but what do I know?

All that being said, I must say, the Scottie makes a very good model and is by far the BEST thing on that box.  In fact, there were other boxes of this carrier with different breeds modeling.  Eh.

Someday, I will shock the crap poop out of Fox & Scruffy and come home with a Scottie and then they'll learn what the words, 'top dawg' really mean.

It's Been A Year

Hi Pups,
Mom let me, Foxy Boy, take over today.  She's kinda sad.  One year ago today our Ginger went over the rainbow bridge and I lost my eye.  It's when the bad thing happened.  If you don't know, click the link.

I remember following my beloved Ginger out the side of the gate.  She figured it out.  She was so smart cause she was a terrier.  We were FREEEEEE!!!!  We ran and ran and ran and it was so wonderful to chase her because I loved her the minute I laid eyes and nose on her.  Then there was a bang and I was walking alone on the side of the road and my eye hurt so badly.  A nice lady picked me up and took me to the shelter cause I only had a license on.  Now I wear this tag and it has mom and dad's cell numbers on the back.

When me and the lady were on the sidewalk at the shelter, Mommy came and she was crying.  I was not my excited self and my eye must've been pretty ugly.  Mommy thanked the lady and carried me to the car and laid me on a blankie and drove me to the dogter.  That's when her phone rang and I heard her say, 'OK, thanks for telling me."  She was crying even more.  She called Daddy and that's when I heard her say that Ginger died.

We got the to dogter and she ran in with me in her arms and said, "Please help my dog."  I liked the people at the dogter.  They put a needle in my paw and it made the pain better.  They told Mommy my eye had to come out the next day and I would have to stay overnight at another, overnight hospital because I had to be watched.  They put the cone of shame on me.  Mommy took me in a crate to the overnight hospital down the street and I stayed there.  You know, there were these puppies there all night who made noise and held my interest.  The dogter told Mommy that was a good thing.  Mommy was happy when she picked me up in the morning and I pulled on the leash and sniffed like crazy on the way to the car.  I had my surgery later that day.

Sorry if I grossed you out but you furiends that like to break free need know what bad things can happen.  I learned the hard way.

I got home and I looked and sniffed EVERYWHERE for my Ginger.  She was gone and I was sad.  I spent the next week laying on Mom's lap trembling here and there and getting well.  By the second week, I felt really good and I wanted to PLAAAYYY!!! 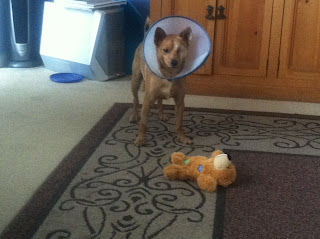 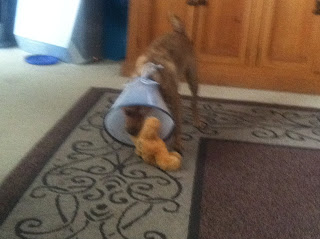 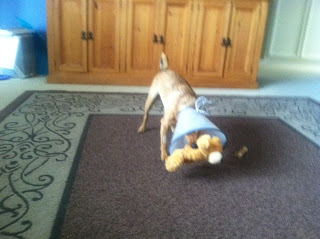 I howled at Mom and Dad every night and finally, Mom said to Dad that I needed a new furiend.  Next thing I know, my Scruffy Doodles came to live with us.  She's more aloof than Ginger but I love her to bits and I love playing tug with her most of all.

Remember, DO NOT leave the yard without your peep!  OK?  OK.
Love,
Mr. Fox